Contrarianism is Alive and Well

Contrarianism is Alive and Well

By Meagan Reimann Posted on August 11, 2014 in Nottingham

But what underscores this general philosophy of occasionally opposing the crowd? Mainly, contrarians understand that the market is not made up of completely rational decision-makers (a false assumption often underlying economic models), but instead irrational human beings prone to emotions like greed and fear, which causes markets to overreact in both directions. Greed pushes investors into popular, pricey asset classes as the allure of future gains trumps conventional wisdom. At the same time, fear pushes investors out of asset classes as the psychological toll of recent losses forces common sense out the window. However, for those that can keep their emotions in check, a contrarian view at some of the more extreme points of market sentiment can produce bountiful rewards. 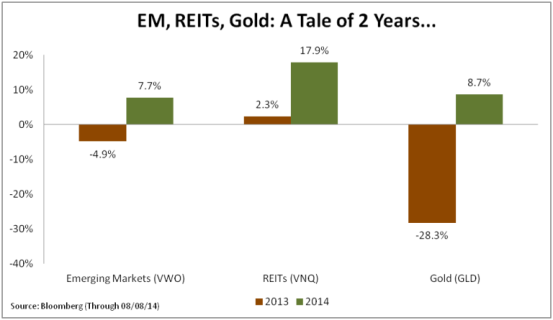 Fast forward to 2014 and the S&P 500 is up a respectable +5.6%, but the real stars have been last year’s laggards – emerging markets up +7.7%, REITs up a whopping +17.9%, and gold up +8.7%. Only time will tell if this type of performance will continue through the second half of the year, but assuming their timing was right (admittedly a big “if”), investors have been rewarded in 2014 for stepping into 2013’s fray. Contrarian investing appears to be alive and well.

So, how do we incorporate this type of contrarianism in our process here at Nottingham? Over the short term, we do everything we can to remove emotion from our decision-making. We have multiple portfolio managers analyze and weigh in on different investment opportunities, and decisions are all data-driven. We view the market through an analytical lens and not an emotional one. If an area of the market has lagged of late, but the numbers make sense, we’ll make an investment. After all, these currently unpopular areas of the market often produce the best opportunities.

Over the long term, we rebalance. Rebalancing is the process of shifting an investment portfolio’s asset allocation back to the desired mix after some set period of time. For example, assume an investor wishes to invest in a portfolio containing 75% equity and 25% fixed income. After one year, stocks have rallied, while bonds have declined in value, pushing the investor’s mix closer to 85%/15%. Rebalancing would involve selling part of the equity portion and reallocating the proceeds to fixed income to push the portfolio back to a split of 75%/25%. Rebalancing ensures that an investor is selling their winners and purchasing more of their losers (buy low/sell high). Plus, the mechanical, rules-based nature of the process completely removes emotion from the equation.

While contrarianism isn’t an absolute rule that can be blindly followed (often times certain investments decline for good reason), it provides an interesting way to view the world to help keep some of our emotional extremes in check. Sometimes it’s cold and lonely away from the warmth of the herd, but often times, that’s exactly what’s needed.

For the Youngest of the Baby Boomers, Some Words of Encouragement